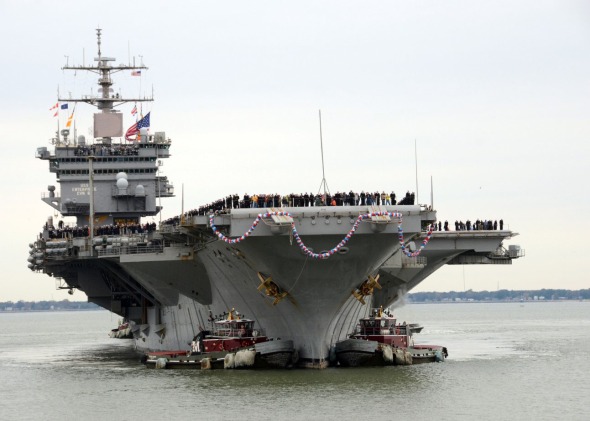 On Sunday, November 4th, 2012 USS ENTERPRISE (CVN-65) completed her final and 25th cruise of a storied naval service.  She was authorized by Congress in 1954 to be the first nuclear powered aircraft carrier and the 8th ship to bear the name USS ENTERPRISE. On January 12th, 1961 USS ENTERPRISE was commissioned into the Fleet. For the next 51 years she would make the distinction of being the 2nd oldest serving ship in the U.S. Navy; the USS CONSTITUTION in Boston Harbor being the oldest.
During those 51 years, USS ENTERPRISE would witness many historic events:
· In October 1962 she would be part of the blockade of Cuba as part of the Cuban Missile Crisis.
· USS ENTERPRISE provided air support to the Vietnam War and numerous deployments in the South China Sea as hostiles on the Korean Peninsula flared up.
· She would be the first aircraft carrier to operate the Navy’s newest fighter, the F-14A Tomcat, during Operation Frequent Wind in 1975 as part of the evacuation of South Vietnam.
· In the 1980’s she continued her service to the country being deployed on WESTPAC cruises during which the 1986 movie “Top Gun” was filmed onboard.
· Returning home in the 1990’s to Newport News Shipyard in Virginia, she would undergo the largest refit on any naval vessel and to extend her service life.  Upon completion she was deployed to numerous cruises in the North Arabian Gulf as part of Operation Southern Watch, the enforcement of the no-fly zone of southern Iraq.
· In October 2001, USS ENTERPRISE was of the first aircraft carriers to launch air strikes into Afghanistan at the start of Operation Enduring Freedom.
With her final cruise over USS ENTERPRISE was inactivated from naval service on December 1st, 2012 and scheduled for decommissioning on March 15th, 2013.  At the inactivation ceremony the Secretary of the Navy, the Honorable Ray Mabus, announced proudly the third Gerald R. Ford-class aircraft carrier CVN-80 will be the ninth ship bearing the name USS ENTERPRISE, thus carrying on the tradition of the legend “Big E”.
Tamiya models has released a 1/350th scale model of the Big E that is fantastically detailed and big. Click on the picture for more details.

Just received a news release from Model Rectifier Corp. which is the importer for Italeri models.

Coming very soon from Italeri is the newly tooled release, the legendary PT-109 Motor Torpedo Boat (#555613) commanded by John F. Kennedy in 1943. Working from the original ELCO drawings, Italeri created about 300 pieces, plus photo-etched parts to recreate the 80’ U.S. Navy Patrol boat in 1/35 scale. The one-piece hull is over 27” long.

This remarkable reproduction is crammed with superb detailing. For instance, the four torpedo tubes, Oerlikon 20mm cannon, four .50 caliber machine guns and two depth charges are spot on. Even the transom mounted smoke generator has been perfectly replicated. You can tell the history has been well researched, as the kit even includes the 37mm anti-tank gun that the crew lashed to the bridge the day before its last mission.

By the way this kit would be a great choice to radio control with a brushless motor and LiPo battery.

For those with wet feet and enjoy ships

As I was walking through the store yesterday I stopped to look at some of the completed models that customers have placed in our display case over the years. One of the things that have always fascinated me are the ship models. Here are three of them. The first is the Fujimi 1/350 scale model of the Imperial Japanese Navy battleship Kongo, built by Allan Bone of O’Fallon Missouri. Allan built this model from the Fujimi kit and added etched metal detail parts and a laser cut wood decking material along with a lot of hard work.

The next model, while only being about half the physical size or so is still the same scale of 1/350. This is the IJN Yukikazi. This Kagero Class destroyer was built using several kits for parts and many etched metal and hand made detail parts. The model is configured for Operation Ten-Go on April 6th & 7th, 1945. The late Dan Keck of University City Missouri was the builder. Dan was an exceptional ship model builder.

And the last to be seen in this post is another model by Dan Keck. This is the USS Buchanan DD 484 as it appeared November 13 and 14 1942 during night action at the Battle of Guadalcanal. 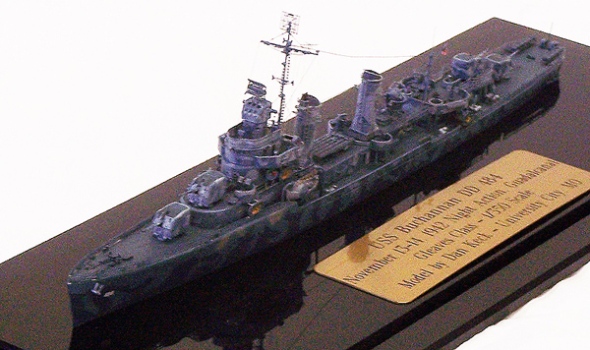 Please excuse the pictures, hopefully I will do better next time. These models show you just what can be accomplished with the different kits that are available, along with patience and research.